Kilve Beach is on the North Somerset Jurassic coast within the Quantock Hills Area of Outstanding Natural Beauty (AONB). It’s a favourite spot for artists and geologists. The slanting strata exposed in the cliffs and on the foreshore are fascinating subjects. I was first introduced to Kilve Beach when my daughter returned from a school trip having found either a tiny crustacean or possibly part of a crinoid in a flake of weathered shale.

As a family we have visited many times and this has resulted in a series of prints, trying to do justice to the subject. The view out across the Bristol Channel, with South Wales in the distance was my first attempt to capture something of Kilve. The weathered and cracked stone pavement leading away to the sea, the rocks covered with seaweed and a headland visible in the mists across the channel.

For the “Paper Prospects” exhibition, at the Somerset Guild of Craftsmen’s gallery in 2017, I created a monochrome print of Kilve. The exhibition was a celebration of the uses of paper in printing and craft. It was the first print I’d done on St. Cuthbert’s locally made paper. It is fabulous paper to work with, it feels much more alive than other papers I’ve used. It is also nice to think that it is manufactured just down the road from where I live. I like to describe this print as a Somerset scene, by a Somerset artist on Somerset paper. I do generally prefer to make reduction prints, but monochrome prints are always an opportunity to use texture and pattern. They reduce everything down to ink or no ink and this tends to focus you on capturing the essence of things.

The action of the tides coming and going rearranges the beach, so each time you visit there are new things to see. It is like a constantly changing kaleidoscope of perfection. For some reason nature’s compositions are always more profound than anything an artist can imagine. In the next print I wanted to take a closer view, excluding the sky and focussing just on the rocks and shale.

Kilve is famous for its fossils and the most spectacular are the large ammonites, found on the shore at the western end of the beach. It’s important to remember that this is a Site of Special Scientific Interest and hammers are not allowed. This is a good thing, it means the fossils will remain there longer, for all to see, until nature slowly erases them. It also makes for a more peaceful, contemplative atmosphere, with none of the frantic hammering and clambering on battered cliffs that you see on the South coast. The ammonites are from the Jurassic, so they are over 145 million years old. This print is a combination of several fossils found at the beach. It’s a monoprint the different coloured inks are applied by hand to a single block.

Sometimes reduction prints don’t work out the way you hoped and this is an example. I had intended to create a print that focussed on the visible strata in the cliffs. Unfortunately, it just didn’t come out the way I wanted. When it was finished and I sat down to decide which prints could go into the edition, there wasn’t a single one that I was happy with. I think this is an experience every printmaker has, but mostly we don’t talk about it. Having invested several weeks into this one print I decided to make a collage. I cut the print into strips, arranged them in layers one on top of another and gave it the title of “Kilve Strata.” The moral of this story is, never give up, no matter what happens!

This is my final print of Kilve, at least for a while, and it’s a view looking East along the beach, with the blue lias cliffs disappearing into the distance and the curving beds of limestone and shale in the foreground.

My prints can be seen at the Somerset Guild of Craftsmen’s gallery and shop, 23a Broad Street, Wells.

I don’t sell reproductions of my prints, but I have made several greetings cards available from Love From The Artist.

Someone has created a brilliant interactive map of Ukiyo-e prints showing the locations depicted in prints by Utagawa Hiroshige.

Edited: With a little bit of searching I’ve just found out that it was created by a computer science undergraduate called George.

Well done George, and thank you!

A couple of people have asked, and the answer is, I am not taking part in Somerset Open Studios this year.

However, the Somerset Guild of Craftsmen will be venue 171 and will be showing work by Guild members Pauline Rook, Chris Kampf and Sue Sinclair.

Chris Kampf, Metal Sculpture. Based on natural forms, Chris’ simple interpretation of leaves and buds in steel, stand out well in a garden background.

Sue Sinclair creates kiln formed pate de verre and calst glass. She is inspired both by the colours of nature and her background in archaeology.

(My work will still be on display in the gallery, but not as part of the Open Studios event.)

My own studio is much more mobile, so is not suited to be a venue. I’ve managed to reduce my equipment down to a few boxes and I am planning to move around in the next year, hoping to get out and about, around Somerset and the South West.

I may take part in a local Christmas Fayre, more about that when I have details.

I plan to do a workshop in Wells next year. Probably just one.

I may do an occasional art/craft fair.

I plan to focus on printmaking, mainly reduction linocut prints. 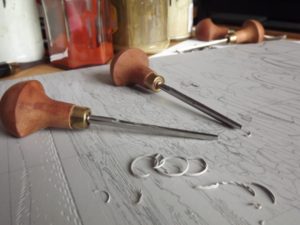 I’ll be running a one day “Introduction to Linocut” workshop at the Somerset Guild of Craftsmen gallery, in Wells, on Saturday 11th August 2018 from 10am to 4pm.

It is the only workshop I will run this year and will be limited to a maximum of five participants.  As a beginner’s workshop the focus is on helping you to get started and giving you enough information and experience to carry on with linocut after the event. I’ll be showing you a method you can use at home, without the need for a press or too much expensive equipment.

The workshop will include demonstrations followed by practical hands-on experience and experimentation with tools and techniques to create your own unique linocut print. Mark-making is incredibly important in linocut, so there will be time to learn on a practice piece before moving onto working on your design. The tools are sharp, so I will teach you about safety too.

I always like it when people bring their own ideas/subjects to the workshop. It is amazing how diverse people’s interests are and it always makes for some lively conversations during the day.

If you have any questions about the workshop then please send a message via my contact form or ask for more details at the Guild shop in Wells.

The next workshop after this one will be in Spring 2019 and will run over a number of weeks. More information on this later. 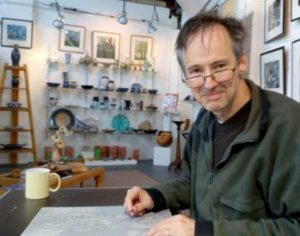 If you subscribe to my newsletter I can send you emails relating to workshops, exhibitions, new work and work in progress, anything relating to my linocut printmaking.

It’s a simple process and you can unsubscribe at any time.

There’s a sale on now, at the Somerset Guild of Craftsmen gallery in Broad St, Wells. From now until the end of October everything is 5% off, including my linocut prints. If you visited the gallery during Art Weeks and were thinking about buying a print, there has never been a better time to buy.

Somerset Art Weeks 2017 festival has finished. It was the first time I’ve taken part and was an interesting experience. I spent most of my time at the Somerset Guild of Craftsmen’s gallery where my work was part of the “Paper Prospects” exhibition, so I’m afraid I didn’t get out to see any other venues.

I made some new work specially for the Prospect theme, joining the many artists who have created work inspired by the landscape at Kilve Beach. I’ve been intending to extend my choice of subjects for some time.

While I was at the gallery I was working on a linocut of an ancient sweet chestnut tree that I saw at Nynehead near Wellington. I didn’t manage to finish it during the two weeks. I’ll add it to the gallery on my website as soon as it’s done, so you can see the results.

The Family friendly “Have a Go” event was lots of fun. I’m very grateful to St. Cuthbert’s Mill for the idea and for providing the paper too.
I created two ready cut lino blocks so that people could try printing on St Cuthbert’s lovely Somerset paper. It was a popular event with some very enthusiastic participants ranging from three years old to quite a bit older. I interpreted “family” very openly to mean “anyone at all.”  I will do a rerun of the “Have a go” event sometime, perhaps at half term.
Although the Paper Prospects exhibition is now finished, my work remains on display at the Guild alongside craft items from all the Guild’s wonderful makers.
We are getting ready for the Christmas rush, so you know where to come to do all your present shopping! We are open every day except Sunday, from 10:00 till 4:00.
I hope you enjoyed the Art Weeks.

My linocut prints are currently on display, until 8th October, at the Somerset Guild of Craftsmen gallery in Wells, as part of the Somerset Art Weeks festival 2017. I’ll be there most days, working on a linocut, so please do call in.

I’ve disabled comments on this blog due to the large number of spam comments that were coming in. If you want to contact me then please use the form on my website.

If you are a spammer, then please don’t.

What’s on in Wells?…

My Multicolour Linocut Print Workshop is on next week, on 23rd and 24th August 2017. Booking is via the Somerset Guild of Craftsmen’s gallery/shop.